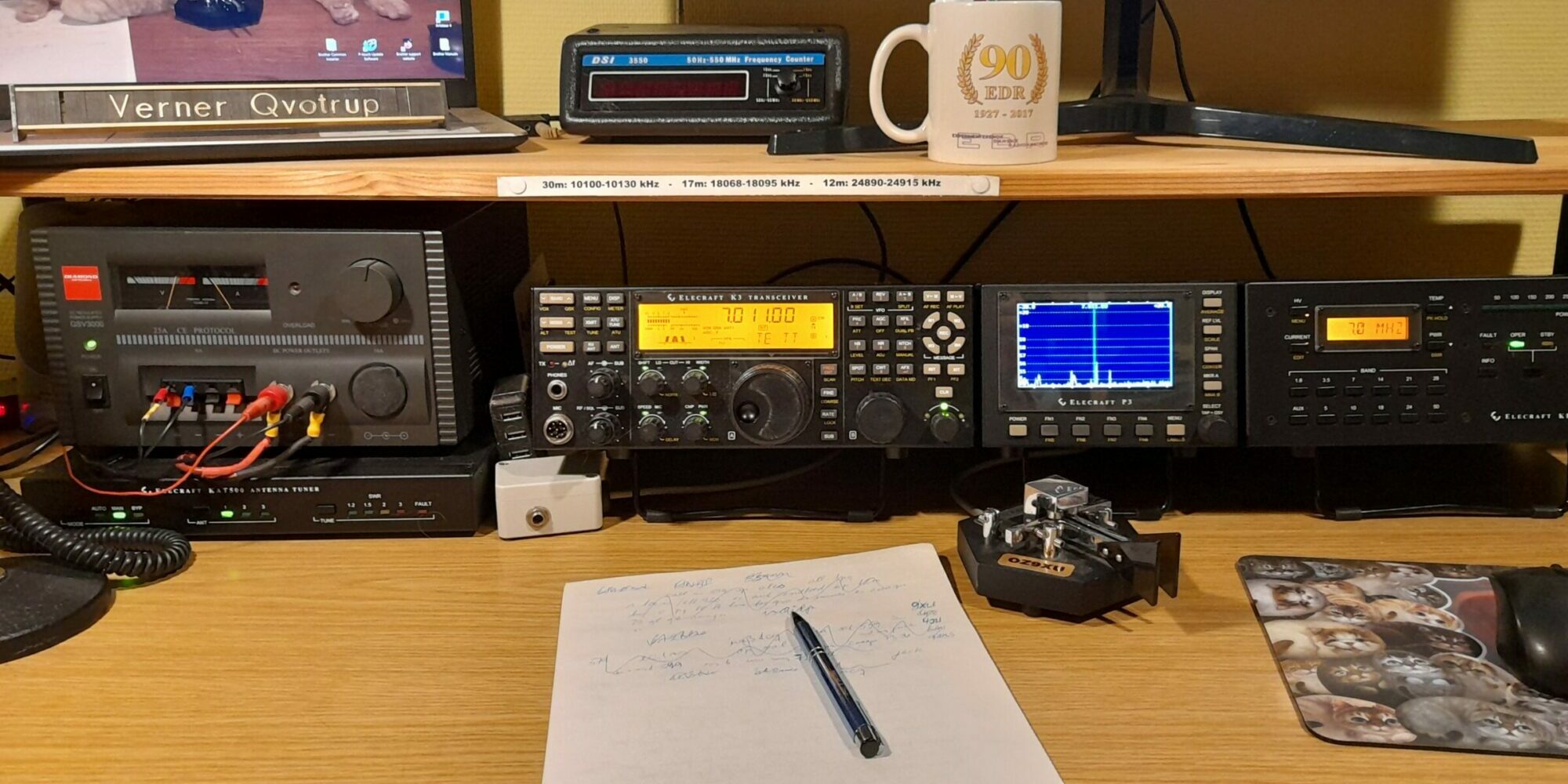 Hi, my name is Verner.

Well, now it’s not always as the pastor preaches. I learned the CW and got the 25 WPM Morse certificate in the military, but I never used it outside the military. Instead I became a telecom technician, which was my employment for more than 30 years until my retirement.

I first started as SWL, OZ-DR1651, in 1971. At the same time, I joined “Experimenterende Danske Radioamatører”, the Danish association of Radio Amateurs, E.D.R.

Shortly after the discharge from the military, I missed “to play the key”, so I applied for an amateur radio license.

I was QRV for some years, but was challenged by BCI/TVI as I lived in an apartment block. At that time, all radio broadcast and TV was terrestrial and analogue.

There was not much activity at the time, but it was better when I moved in own house. Unfortunately, there was “other disturbing elements”, among other things work and family, which required my attention.

After these 20 years of QRT, often referenced as “The big black hole in my life”, I’m now QRV again.

I work on all bands accessible on my radio (6m through 160m), including WARC and 60m bands.

Almost every QSO is made in CW, only few in SSB, mostly in danish QSO-parties.

ALL CW QSO’s are made with genuine CW, that is with a manually hand operated key, bug or paddle, received and decoded using my ears, brain, skills and paper/pencil.
No need for computer, I want to have fun.

My main interest is the communication, mainly CW DXing, but also local EU QSO’s now and then. The radio technique is limited to “small-scale” projects due to my bad eyes.

My computer is for database lookups, logging and firmware updates only and will not be a part of any radio communication whatsoever.

Digi mode and V/U/SHF bands (except 6m CW) do not have my interest.

I don’t use any kind of WEB-SDR or remote equipment. Every QSO’s made in the past has been done with my transceivers, antennas AND operator installed on my QTH’s and every QSO’s in the future will be produced in the same way. No cheating here.

With 5P5Q, I only need the 80m band and approx. 30 points for the Challenge Award before the goal is reached.

Naturally, I will be active on the bands I have available on my radio (6-160m), there will always be gaps to close and new countries to run.

TEJN, a small town located on the North-East coast of Bornholm Island.
The island of Bornholm are located in the Baltic Sea, just between the South coast of Sweden (SM) and the North coast of Poland (SP).

ELEVATION: 7 meters above sea level and about 35 meters from the coast.